Renée Tannenbaum appeared at a variety of venues in her native Canada, Italy and New York City before moving to Washington DC in 2001. Singing jazz standards in four languages, Renée plays with the area’s top musicians, fronting her own combo at the city’s best music venues, including Washington’s premier jazz club, Blues Alley. She has also performed at prestigious concerts, such as, the Take Five! jazz series at the Smithsonian American Art Museum and the National Gallery of Art’s Jazz in the Garden concert series. “…Renée performs her subtle interpretations with an elegant intensity and a voice that is at once sweet and stirring” Gail Wein, National Public Radio.

Rick Peralta, a San Francisco Bay area native, has been a professional musician in the DC area for fifteen years. An Emmy-award winning guitarist, he holds a Masters in Music in Stage and Studio Guitar from Howard University, Washington, DC. He has also supported Grammy and Tony award-winning artists and toured the mid-Atlantic region as a member of Back to Zero, one of the top cover bands in the metro area. An accomplished jazz and classical guitarist, Rick performs with the Laissez Foure jazz quartet, and many others. A consummate musician, The Washington Post has described Rick’s playing as “smooth and lively.” 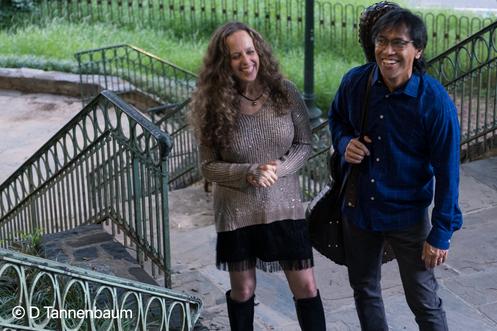 Based in Washington DC, guitarist Rick Peralta and vocalist Renée Tannenbaum draw their songlist from the great tunes of the American Songbook and the world of Latin jazz. Rick’s superb musicianship is complemented by the smooth, lyrical style of Renée, who performs the duo’s repertoire in four languages.